Setting up a voice recording studio at home

Recently I was asked by the wonderful folks over at Makermet Studios to record a voice-over for an animation they made for a new app called MS Unite. I was thrilled as I have been keen to work more with my voice. For your entertainment, here is the video with my voice over then I’ll write a bit more about how I set up a voice recording studio at home. I’ll share you some tricks, tips and suggestions for kit.

I set up my kit on the desk in my office. My kit at the moment is:

Put your hand in this shape.
Put your thumb near your mouth and your little finger to the mic.
This is a good mouth to mic distance for your recording.

When I sent a test recording to Alex over at Makermet, he said they could hear too much of the echo of the little room I was recording in. Their suggestions were putting cushions round the microphone. In my lo-fi setup, I used a vase and a plant pot to hold up the cushions either side of the microphone. We also realised a blanket would be a great idea to reduce echo from behind me. I set up two tripods, with one leg of each on the desk, as well as a mic stand behind me. This tripod of stands created a makeshift triangular den so I could drape a blanket over the stands and create a cushioned, mini studio within a studio. A meta-studio if you will. Here is a photo (sans blanket – just imagine a cosy cover draped over the stands!) of my rickety set up for your enjoyment. 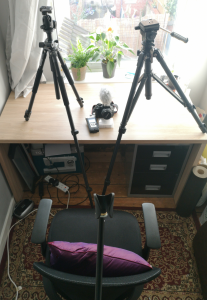 If you seek any advice, wanna chat about your own set up or even have any advice for me, I’d love to hear from you.

Video diaries for The Nyamba Foundation